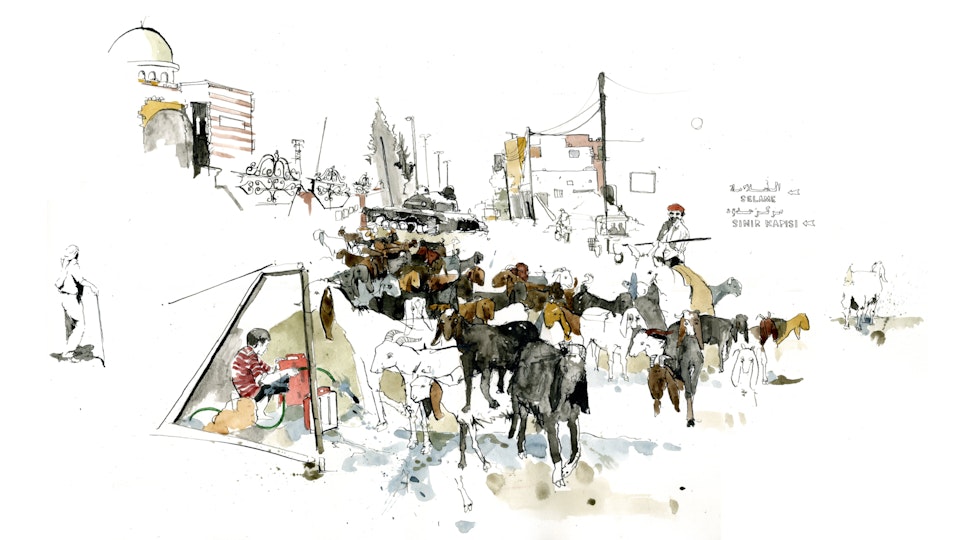 Syria: a bakery and a climbing frame tank

At Kilis the border is almost entirely open. After walking 4km you are greeted by casually dressed men, who are the Free Syrian Army, at best one has a badge and one has a gun tucked into his belt. I am told 5 days ago that there was no such thing as a passport stamp here, which goes to show the newness of their control in the North of Syria, to match their new 'Syrian' flag.

From here I was a guest of the FSA staying in their media head quarters in Azaz. Drawing as and when I could, which they welcome in an attempt to show the rest of the world the indiscriminate shelling and wanton destruction carried out by the Syrian Army.

The fighting, in the centre of Azaz, at least, (although the airport is host to regular fighting) stopped two weeks ago allowing the displaced to drift back in. Finding their shops had been caught in the crossfire, raided or their houses shelled. The main damage though lies on the road running to the Turkish border town of Kilis. 5 destroyed tanks, a blown up lorry, a mosque with one side missing and grenaded shop fronts, now blocked up with stones to protect what little remains inside.

Whilst I sat and drew it occurred to me that the most shocking thing, perhaps, was the children playing as they do, in amongst the tanks and the rubble - this has obviously become normal for them and with the schools now shut in Azaz this is unlikely to change.